Need some gift ideas for the football fan in your life? Check out this concise list of 15 Las Vegas Raiders gifts. The lovers of the “silver and black” will love these gifts.

This article contains affiliate links. If you click a link and buy something I may receive a small commission at no extra cost to you. As an Amazon Associate I earn from qualifying purchases. For more information please see the Disclosure page.

Note: this article has been updated to include even more great Las Vegas Raiders gifts.

A lot of Raiders merchandise on Amazon and other stores hasn’t updated to reflect the team’s move from Oakland to Las Vegas. There is still a lot of “Oakland Raiders” gear, but the amount of Las Vegas Raiders gear hasn’t caught up yet. But it will.

Chances are good that an Oakland Raiders fan will still love the Vegas Raiders. Raider Nation is still going strong!

Most of them will make a great gift this holiday season…or any season for that matter. (Heck, I bet some football fans celebrate the start of the football season harder than they do the holidays.)

Not all of these gifts will work for the Raiders fan in your life, but scroll through them all and hopefully at least one will be the perfect gift.

A classic Raiders ball cap. If the Raiders fan in your life (man or woman) doesn’t already have a Raiders hat then this ball cap from New Era is a good choice.

It is adjustable with a snap-back closure.

It’s a great way for them to show off their team pride.

Here is a good Christmas gift idea for the Raider fan in your life. They can adorn their vehicle and show off their Raider pride.

(And it’s pretty fitting consider they have Carr as quarterback. LOL) 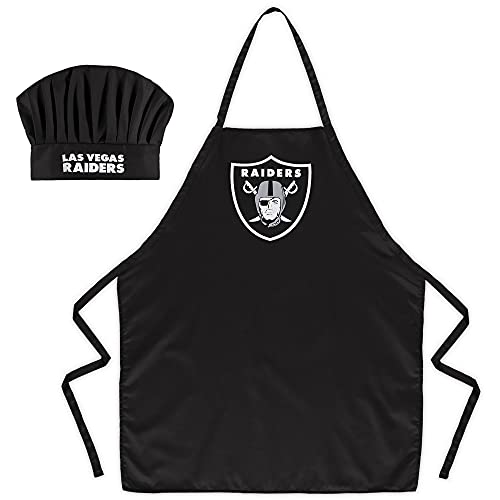 If your Raiders fan loves to cook or barbeque then check out this well-rated Raiders apron and chef’s hat from Pro Specialties.

It is a great gift for both men and women that love to cook.

Imagine how happy they’ll be serving up Thanksgiving dinner or Christmas dinner wearing this.

This is a soft-sided cooler that can hold 16 cans, or 12 cans with ample ice. It proudly shows off the silver and black colors with the Raiders logo. (And it is made by Coleman…pioneers in coolers.)

It’s a great choice for die-hard fans that have to pack a lunch to work everyday. They need to bring their lunch anyway, so why not show off their Raider pride while they’re at it.

And on the weekend it’ll keep their favorite beverages cool while they go to a friend’s house to watch the big game.

This is a small static cling decal that a Raider fan can put on their vehicle window to show off their “membership” in the Raider Nation.

It would make a great stocking stuffer for the Raiders fan on your Christmas list. Click here if you want more information on Amazon. 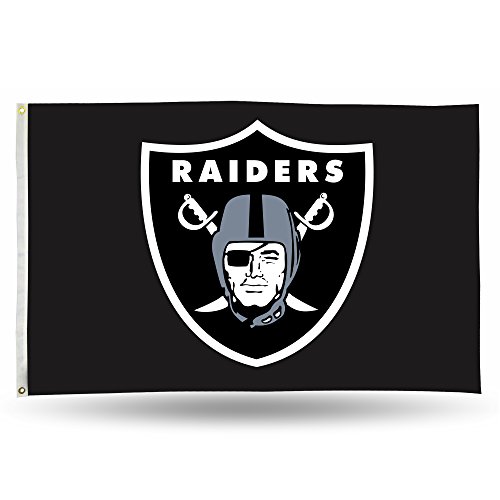 This is an outdoor Raiders flag that measures 3-feet by 5-feet. It is made of 100% polyester, and it is officially licensed.

It would look great hanging outside the house, in a man cave, she-shed or anywhere else they watch their favorite football team.

(A previous flag I had listed on here is no longer available on Amazon, so I replaced with this classic flag.) 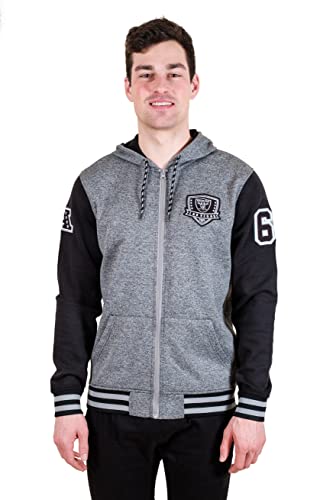 This hoodie looks cozy. It is made of a 60% cotton and 40% polyester blend.

It has the number “60” on it to represent the year the team was founded.

Female Raiders fans aren’t left out when it comes to Raiders merch. There are lots of great Raiders clothes for women including this long-sleeve Raiders t-shirt.

This Raiders 20-ounce tumbler would make a great stocking stuffer for the Raiders fan in your life. I wasn’t going to add a travel mug to the list of Christmas gift ideas for a Raiders fan…until I saw this great-looking mug.

It’s an easy way for them to show team spirit while sipping their favorite drink.

What better way to countdown to the game than by tossing around a mini football with your friends or family? This could make a great stocking stuffer for the “mini” Raiders fan in your life too.

This night light is activated by a touch sensor and it gives the illusion of a projected 3-D helmet. It can display 7 different colors. It is one of the unique Raiders gifts that kids and adults will love.

Bo Jackson was one of the most electric athletes in the world and the first athlete to be selected as an All-Star in two different major leagues. Incredible!

He was a Pro Bowl running back for the Los Angeles Raiders (when the Raiders were still in LA), and an all-star in Major League baseball while he played with the Kansas City Royals. (If you’re a baseball fan you probably remember his great performance in the 1989 All-Star game.)

And while university he won the Heisman trophy in 1985…many Auburn fans still remember his amazing runs.

He was a strong football player and super-fast too. He ran a verified 40-year dash in 4.12 seconds. (Reference).

Unfortunately he had his pro career sidelined by a hip injury he sustained in a January 1991 football game. (Reference)

His jersey still makes a great gift for a Raiders fan! When you buy a jersey of a current player there is always that risk that the player will be traded or sign as a free agent on a different team. Then it can feel a little awkward wearing that jersey.

But no need to worry about that when you get a jersey from a retired great athlete.

This is a Legacy Replica jersey that is available on the NFL Shop website.

13) Get a Raiders Throw Blanket 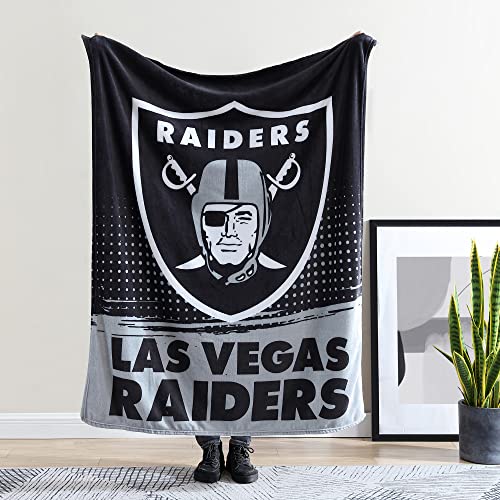 Throw blankets are a great gift…especially if they have your favorite team on it. That’s why this blanket from Cathay Sports will make a great gift for Raiders fans.

Fans that live right in Las Vegas may not need a warm blanket, but I bet they’ll want one. And since Raiders nation spreads throughout the land…even up in the colder Northern states, this Raiders gift is sure to hit the mark. 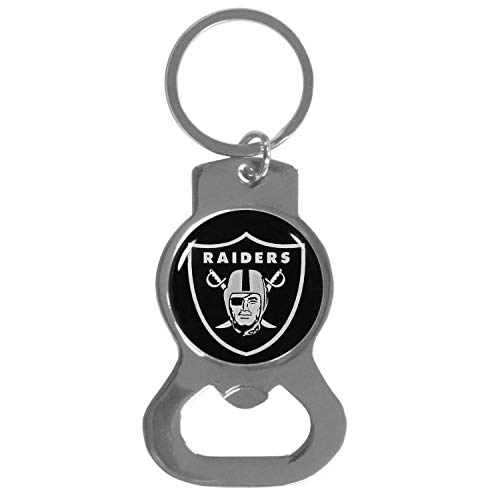 And if you have a Raiders fan in your life, why not get a quality bottle opener with their favorite team’s logo on it? 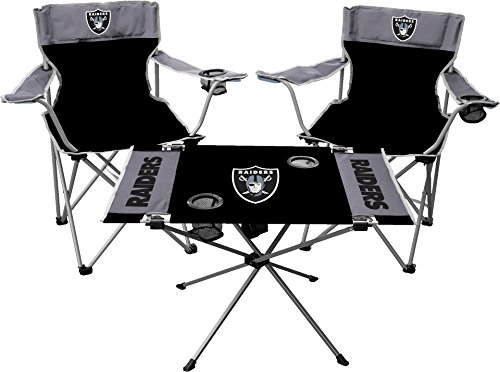 It comes with a carrying bag to haul the set around.

The table has two cupholders right in it, and each of the chairs has one cupholder on the armrest.

Just note, the chairs aren’t super big though. The manufacturer listed the weight capacity as 225 pounds per chair. So keep that in mind.

Click here for more details on this fun tailgating set.

So did these Las Vegas Raiders gifts help take the stress out of buying something for the Raiders fan in your life?

(Remember that online shopping will be huge this year and shipping may be slightly delayed…so don’t wait too long.)

About ‘Santa Read my Mind’

We want to help you find great Christmas gifts by providing you concise lists of Christmas Gift Ideas for everyone on your list.

SantaReadMyMind.com  is a participant in the Amazon Services LLC Associates Program, an affiliate advertising program designed to provide a means for sites to earn advertising fees by advertising and linking to products on Amazon.com. Amazon and the Amazon logo are trademarks of Amazon.com, Inc, or its affiliates.